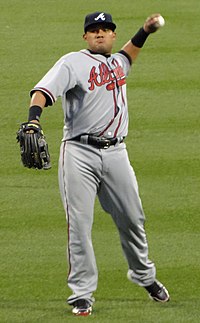 Brian Snitker’s bullpen management has been an issue all year. To be fair, he’s had little to work with, and it’s only gotten worse. But there’s some untested arms that have shined in the smallest of sample sizes, and the Braves skipper would do well to cast his lot with the likes of Sobotka, Fried, Newcomb and Toussaint as the bridge to Vizcaino and Minter. Brach and JV should figure in the mix, too, but if you see Biddle or Winkler enter a one-run game in the 7th, the Braves are likely toast.

Pay close attention to Dodgers catcher Yasmani Grandal, for he may well be a Brave in 2019. The free agent-to be is a plus defender, excellent pitch framer and an asset at the plate (24 HR, .815 OPS). He struggles against southpaws, but with Tyler Flowers backing him up, that won’t be a problem.

Much too early trade proposal: Julio Teheran and Kolby Allard to the Brewers for Corey Knebel and super utilityman Hernan Perez. Bag on Juley if you want, but he’d be a significant upgrade from the likes of Brent Suter and Zack Davies.

Signing a stud reliever like Kimbrel, who showed signs of slippage this year, would be a mistake. Same goes for re-upping Nick Markakis, who turned into Ken Oberkfell in the second half: .258-4-32, .332 OBP, .369 slugging percentage.

Speaking of free agents, Jon Sciambi recently tweeted he was leaving ESPN. Of all the upgrades the Braves could make, Boog and Francoeur replacing Chip and Joe would be the biggest. Of course we’ll probably end up with Chip and P.E.D. Byrd, the two biggest goobers in broadcasting.

3 thoughts on “#Braves must rely on the future, now”